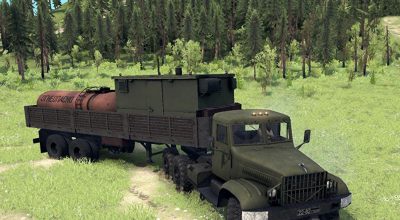 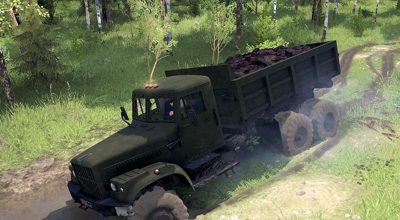 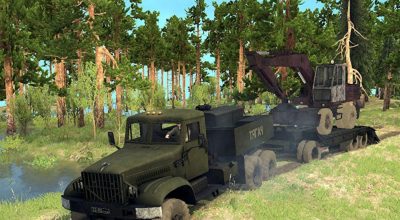 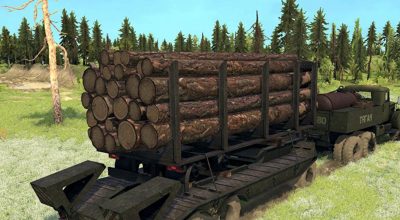 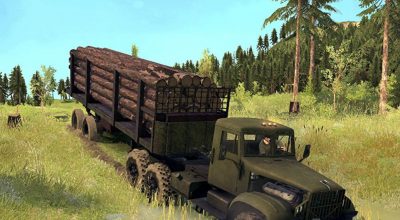 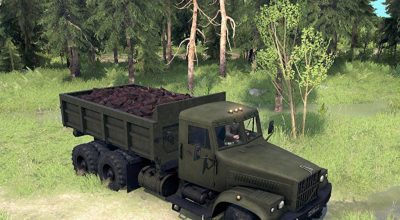 EO-3323 carried out the overhaul, problems with the control of the installation were lost. Has 1 of its addon.

Kraz-256 dumper is equipped with a tipper with side unloading y-32 (2 of its add-ons + 4 standard). Has 2 loads of 3 and 6 points. Suitable for the transport of dynamic loads, the body device allows you to dump loads of any height.

Yaaz-214 ballast tractor. It is intended for transportation of special machinery to the place of work. Included trawl adapted for EO-3323 and quite playable. Removed half of the wheels, replaced the trolley, the model did not turn out factory, but on the Internet I met similar alterations in the real world. Also, the trawl has its own load. If you do not want to drive it empty, then you can load logs 4 points.
There are 11 of their add-ons + 4 standard. Capacity for fuel, diesel power station, barrels and boxes with the possibility of combining. There is also a ballast block weighing 6 tons. He does not play a special role in the game, but if you drag the trawl with EO-3323, then the difference with him and without it is noticeable in mud and on the heights.

Yaaz-214 chassis. I thought of it as a truck tractor, but later it was made as a chassis on request.
10 of their addons + 4 standard. Koniki under 3 points, a trailer with conics under 3 points, a coupler, a semitrailer sortimentovoz under 4 points and a semitrailer sortimentovoz under 6 points. Another side semi-trailer with openable sides. It was created to transport dynamic loads, but to fit it into the game, there is a cargo of 4 points, a fuel tank and a wagon that can be taken to the sawing and handed over for 4 points or used as a container for fuel and repair parts.

That’s all for now. The mod will be modified. Over time, add addons and the technology itself.
If errors are found, write – I will correct it.