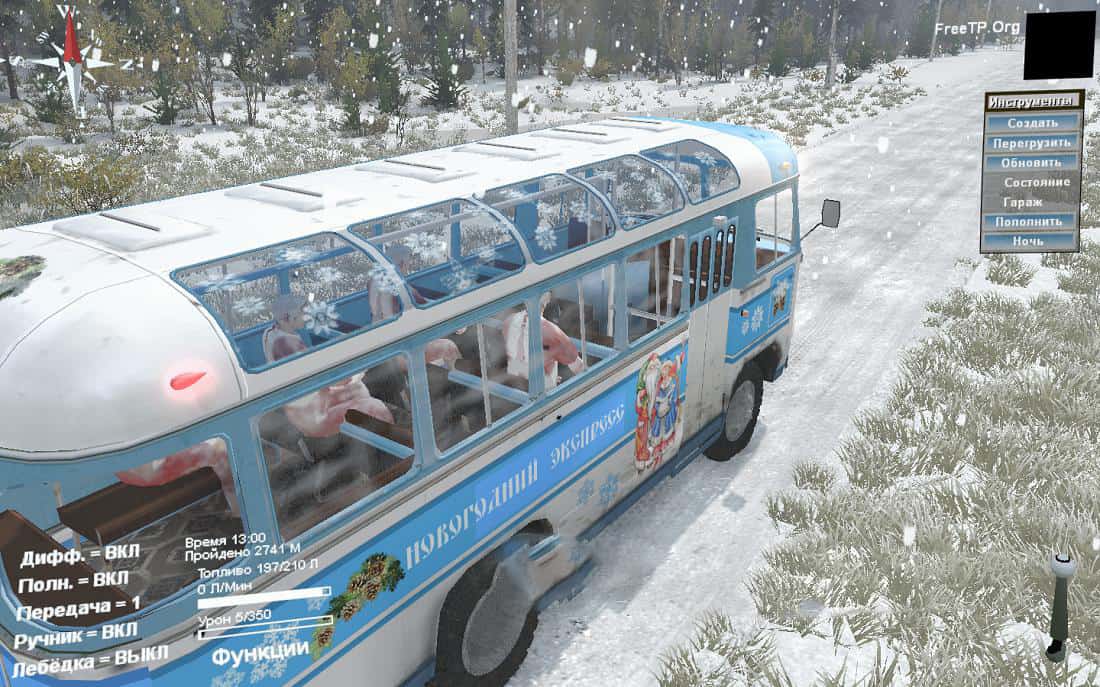 New Year texture for PAZ-3201 and the car, New Year screensaver and renamed names of locations.

Although this is mainly just textures and a fairy tale description, the mod offers everyone its own New Year’s story to play on any suitable winter card, or with a winter mod:

Fairy-tale worlds coexist with our world, the so-called parallel, fairy-tale dimensions … And every New Year, Santa Claus takes some kind people there who, together with Santa Claus’s helpers, help him on New Year’s holidays. This year, Santa Claus chose this bus and its driver, transporting it to its fairy world. Many do not know where Santa Claus takes gifts for us. So … For example, in these places now forest fairies gather in one place magic invisible cones. They are loaded miraculously, and under the guise of logs (which the fairy takes in the trailer). Then the Snow Maiden with assistants turns them into gifts. We have to breed everything in places where they will turn into gifts. After the first flight with a trailer, you can attach it to reception points, lower the stairs, and on the next flight this place will look like New Year’s.

We will also deliver the tree for making gifts, and on the bus we will deliver the wizards (the logs we create in such a wonderful way sometimes turn into assistant wizards a year). The little man for whom this gift was made expressed a desire to share with other small and big men.
HAPPY NEW YEAR!

The installation of the mod is normal:
Move the contents of the MEDIA folder from the folder (paz-Nov god) to the MEDIA game folder.

To return the textures of the original mod, just reinstall the main mod.