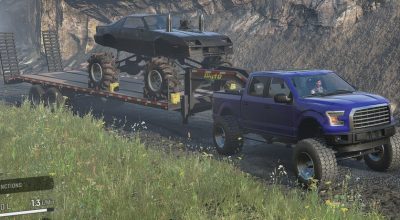 Hey, hey. I initially built this truck for my wife to use and decided to build a console friendly version for public release (hers is branded, private, and wont see a public PC release, so dont bother asking about it).

So, here we have the 2015 GWC G150. Its been fully modified with a custom suspension lift, Coyote swapped, and just overall built up to be better than factory. 3 engine options from a 5.0 Coyote, an old 429 Boss, and a big block 460 that’s been worked over quite a bit. My usual 3 gear box choices are here. 2 suspension options between the already tall suspension and an even higher version of it. I did include both scout trailers and IR’s gooseneck trailers, though I probably wouldnt try to haul too much with it. The suspensions are tuned for trail crawling and front end picks up pretty easily with a heavy load. You’ve been warned.