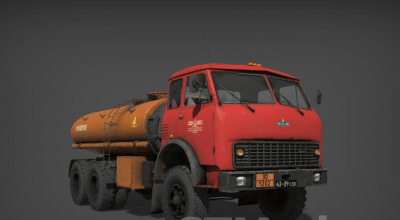 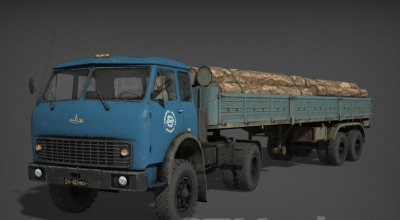 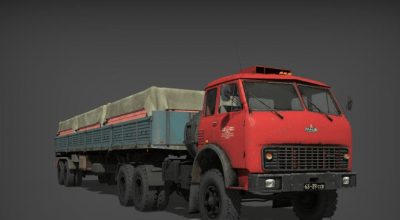 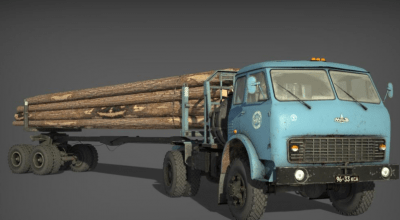 Friends! I am glad to present to you a pack of trucks MAZ 500 series for SpinTires: Mudrunner. Pak was very popular in the old version of the game, and finally it is ready to update it for the new version. True update it is difficult to call, because. almost everything was done anew: almost entirely new models, new textures for them, new settings and animation. And, of course, all the new features of Mudrunner. Enjoy!

At the moment the package includes the following cars:

MAZ-504V is a truck tractor with a 4×2 wheel arrangement, a short base and a powerful YaMZ-238 engine. The car is pre-installed with a fifth wheel coupling. The machine has a wide range of own semi-trailers: 3 trailers on the chassis MAZ-5205 and an experimental semi-trailer-tank on the chassis MAZ-5215. In addition, the tractor is compatible with semitrailers MAZ-5232B and NAMI-790 from MAZ-200 (if available in subscriptions). Of add-ons, only a spare tire is available. Allows you to carry 3/4 points of logs, fuel, repair parts and garage parts. Passage – low, especially in an unloaded state. Driving on the 504th on the SpinTires roads is a real hardcore for experienced drivers.

MAZ-509A is a log truck, developed by the MAZ plant in 1966 (509P) and replaced by the outdated MAZ-501. The modification of the 509A went to the series in 1977. Wheel formula 4×4, engine YMZ-236. There is a logging platform installed in advance and three types of dissolution are available: long folding, long guided (on ropes) and short controlled (on ropes). From addons – add. tank, reserve on the frame and reserve for the cabin. Allows you to carry 4/6 points of logs. Excellent cross-country ability.

MAZ-515B – truck tractor with a wheel arrangement 6×4 and engine YAMZ-238. In the fashion this truck is a collective image of the models 514/515/516, due to which it has the widest functional. From the add-ons are available: coupling and semitrailers MAZ-5205 and MAZ-941, the onboard platform, timber platform with a crane (default), tank, awning, container, service on-board platform. Also addons are available: the reserve for the cab, the reserve for the frame and the add. tank. Passage is average.

Pak is planned to be expanded by one / two trucks (a dumper and, possibly, a crane) and a set of own trailers.

I want to express my gratitude to the author of Kirykha for his MAZ-504 mod for FS2013. it was with his model that I started working on a pack of 500 MAZs, still in the old version of the game. And even in this version you can find some of its elements. Thanks to the team “So come down” for constructive criticism, useful advice and ideas. And thank you, dear players, because, if not for the huge popularity of the previous version of the pack, I would not have undertaken such a serious revision.

Have a good game!

Friends! Based on the results of the first tests, a number of errors were found, which corrects this update. Thanks to everyone who helped to identify them.
1. Fixed a bug with physical. model MAZ-504V (“jitter” when interacting with some objects of the terrain)
2. Fixed the point of hook of winch and trailers on MAZ-509A
3. On the collapsible dissolution of the control cable removed
4. Slightly corrected the weighting MAZ-515B
5. The angle of the opening of the grip on the MAZ-515B
6. Corrected the camera position on all cars
7. On all cars of the pack, now visible seals of the windows when viewed from the cab
Have a good game!